Scriba project trends with a ‘One Minute Brief’

Followers of Scriba PR will know we’re big fans of the social media powerhouse that is One Minute Briefs. And, when our friends at Vapour were looking to make a serious splash with the launch of an SD-WAN solution for hybrid workers, we knew the OMBLES would bring the noise.

Vapour has been cloud-focused since day one – disrupting, innovating, demystifying. With hybrid working well-and-truly here to stay, though, the organisation wants to get people thinking about the cyber security risks lurking in the background when we’re away from the traditional workplace. And that they did.

Having set a (one minute) brief for the 33.1k-strong social media community, the campaign’s hashtag #RisksLurkWithRemoteWork featured amongst Twitter’s ‘trending’ charts – alongside National Tea Day and The Queen’s 95th birthday.

Not only that, but the subject matter – and some savvy social media management – generated over 200 entries, 76.6k impressions, and reached around 6.6 million people. 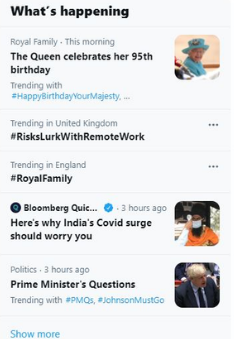 So, what was the brief?

Millions of people are working from home using their own broadband routers, which may be several years old, are unlikely to have had any security updates since they were installed, and are probably using the standard factory settings/passwords as when they first arrived! Hardly belt and braces!

And have you ever wondered what dangers lurk when you head to a café or co-working space and connect to an unsecure open WiFi network?

Cloud technology specialist Vapour wants to encourage businesses to think about the millions of employees who may be unwittingly putting corporate network and data security at risk – just by doing their job!

So, we tasked the OMBLES, with getting to the route(r) of the problem!

You wouldn’t leave your front door open along with a sign saying: ‘Security free house, come in and help yourself’ – so why do the same with your tech?

This long-standing security concern isn’t going to go away – in fact, with the death of the traditional office 9-5, it’s only going to get bigger. Businesses that think they’ve got a robust hybrid working set-up, just because their colleagues can log on from anywhere, need to pay much sharper attention to their network and data security.

That’s why Vapour has launched a hybrid working solution, that integrates endpoint and network security through state-of-the-art SD-WAN technologies, to reduce organisations’ exposure to cyber threats, regardless of where employees decide to work from one day to the next.

While we can’t share all of the (incredible) entries, have a scroll through the shortlist gallery below and let us know which ones resonate with you.

Thank you again Vapour and OMBLES for such an excellent day. Until next time…

Back to all Words

Spark up conversation with… Jade Parkinson

My first week at Scriba PR

Our words mean business, but does our business need your words?

Spark up conversation with… Ruth Harrison-Davies